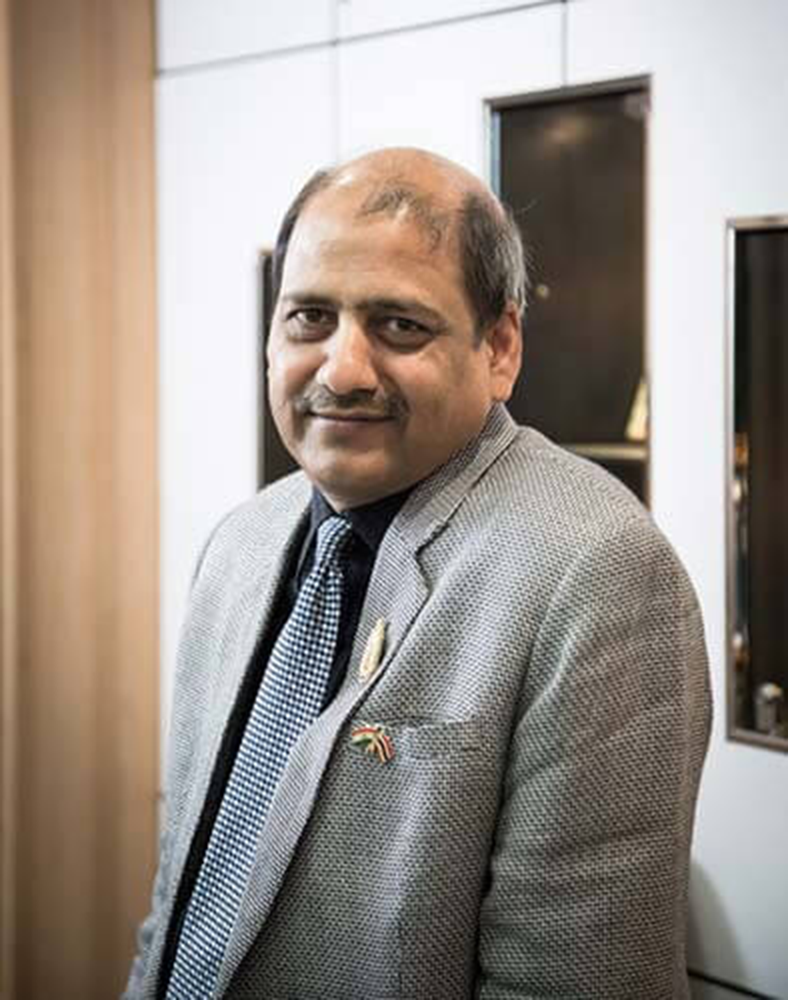 Mr. Susheel Kumar Saraff is the founder and visionary Chairman of Saraff Group of Companies. A first generation entrepreneur, his success journey is inspirational to the Indian origin businesses not only in Thailand but also the world over. Under his dynamic, exemplary leadership, Saraff Group is now a diversified conglomerate with business presence in US, Thailand, India, and Hong Kong. His vision unlocked several potential opportunities in Information Technology, Renewable Energy, Diamonds and Jewelry, Plastics, lead recycling, and metal refining, and Real Estate sectors. Mr. Saraff is very keen in the promotion of SMEs, venture capital, access to financing for innovative projects and also investing in early-age startups. He has recently tied up with NuWater Global, South Africa who have mastered and proven the technology of recycling sewage water into drinkable water with the sole purpose of contributing to National Mission for Clean Ganga and various other such river and lake cleaning projects oriented with Swachh Bharat Mission and Smart City Missions. He is currently setting up a manufacturing unit as a Joint Venture Company with NuWater Global in India under Make in India Project to manufacture Plant and Machinery for recycling dirty water.

As the President of the India-Thai Chamber of Commerce (April 2011-April 2015), he has provided strategic leadership to the Board of Directors and established the Chamber to new heights by creating business opportunities for its members.  Under his guidance, ITCC has developed a systematic institutional approach for strengthening socio-economic and cultural ties between Thailand and India. Board of Trade of Thailand has recognized his outstanding contribution in promoting bilateral trade relations between Thailand and foreign nations and appointed him as the Director at Board of Trade of Thailand (2013-2015) & later as Advisor (2015 – 2017).  Mr. Saraff has played a significant role as a member of the Presidents’ Council of the Joint Foreign Chamber of Commerce in Thailand (JFCCT) during 2011-2015.

As a Chairman of the Organizing Committee, Mr. Saraff successfully organized the 2nd World Hindu Economic Forum in Bangkok during 10 & 11 August 2013. He has played a very active role in organizing the annual WHEF conference in Delhi (Nov. 2014), London (Sept 2015), Los Angeles (2016).

As a Governing Council Member of World Hindu Economic Forum, Mr. Saraff is managing the expansion of WHEF network in South and South East Asia. He is the core member of the organizing committee of the 2nd World Hindu Congress 2018 to be held at Chicago from 7-9 September 2018.

Mr. Saraff is also serving as International Working President for International Vaish Federation and President of VHP Association Thailand, Trustee, Vishwa Hindu Parishad, Bharat and also an active member of several social and community organizations in Thailand, which are instrumental in connecting the Thai-Indian community through a wide range of community services throughout the year. He is also Chairman of the Shri Dadiji Mandir Trust, Titilagarh, Odisha that organizes annual free eye cataract surgery camp for the people living in remote areas. The trust also runs SDMT Prabhavati Public School, affiliated to Central Board of Secondary Education.

He has supported Ekal Vidyalaya Movement in India and raised funds for Ekal Schools from Thailand. Recently, Mr. Saraff was actively involved in the fund-raising for the development projects of the India Development Foundation of Overseas Indians, Ministry of External Affairs, Government of India. Known for his strong belief in preserving the Indian heritage, he philanthropically supports great social causes.

Under the patronage of the Embassy of India, Mr. Saraff is a founder member and Convener of Indian Social Club of Thailand that represents about 65 Associations of Indian Community in Thailand. Under the leadership of Mr. Saraff, ISCT organizes annual Thai-Indian Fun Fair for strengthening social and cultural relation as well as the friendship between India and Thailand.

He is a well-known businessman dedicated to the community development both in Thailand and India. Mr. Susheel Saraff is the recipient of the Prestigious Pravasi Bharatiya Samman Award 2017 conferred by the President of India on 9th January 2017 at Pravasi Bharatiya Divas Convention held at Bengaluru, India. He has also received Global Living Legend Award from Adding Smiles Foundation in February 2017.

Mr. Saraff is the recipient of Pravasi Ratna Award honored by Indywood Film carnival on 2nd Nov 2017 for his business acumen and immense contributions to the overall economic development of the country.

Hindusthan Arts and Music Society, Kolkata felicitated Mr Saraff with Swami Vivekananda Award on 28 Dec 2017 in recognition of his outstanding contribution in enriching the Indian art, music, and culture in India and abroad.